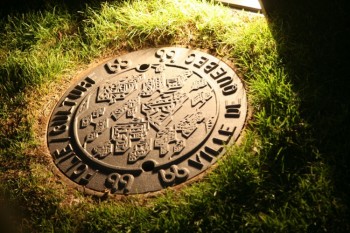 View and print the map! (in PDF format)

On the occasion of Québec City’s 400th anniversary, Folie/Culture offered an unusual form of artistic appropriation of the urban fabric while at the same time raising the sometimes difficult public issues that can be found throughout its environment: “Manhole cover art.” This practice consisted in giving artists the task of designing functional manhole covers. These plates, also known more poetically as “eyes in the street” comply to standards of size, but are unique in appearance. In turn, Folie/Culture proposed to artists of Québec City to design street bas-reliefs. The theme of the look, reflection of the city’s hidden face, of what is indescribable became self-evident, as much by its relevance as a by a nod to a poetic name.

Unfortunately, Martin Bureau’s work, Tribute to Her Gracious Majesty, was not exhibited, having been censored by the Ville de Québec and the Fonderie Bibby-Ste-Croix.