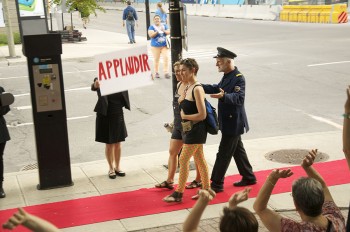 On June 27, 2014, Folie/Culture put a spanner in the works of the urban machine and invited you to participate for a second time in Carrefour dément. This year’s performance was held at Montreal’s Square Viger.

The duration of the performance was timed to the ticking of the crosswalk light: 20 seconds, 30 seconds, 45 seconds. The Folie/Culture team seized these brief moments to encourage pedestrians to exult in a series of “grandiose” actions, choreographed to the rhythm of the traffic and the traffic light, indifferent to human folly. Through the power of art, this intersection in downtown Montreal became the site of a highly resonant experiment examining the human’s place in the urban machine.

The fragile balance between cars and humans is concentrated at a point of cohabitation between unequal forces. How does this meeting between two opposing systems with conflicting goals take shape? Different speeds, different functions, different intentions: flânerie or achieving a goal, casual strolling or constant acceleration, animal strength or the hum of internal combustion engines: it’s a crossroad where Folie/Culture, as always, walks a fine line, unafraid to take risks.

Carrefour dément was part of Encuentro 2014 — Manifeste ! Chorégraphie des mouvements sociaux dans les Amériques, an event that invited researchers, activists and artists of all disciplines to examine the practical, ethical, aesthetic, theatrical and performative events and protests that have emerged across the Americas. The event was held June 21–28, 2014, in Montreal.